So PulseRacing hosted the Single Track Classic this past weekend at Hardwood Hills.  And by all reports it was an awesome event!  And Team True Grit showed up to represent in good form...with JennR taking first overall women, and KevinM took third (not women). 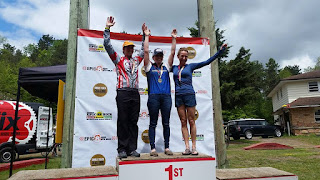 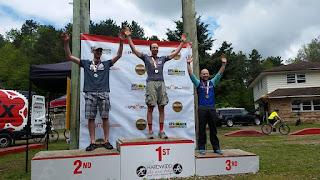 And a couple of other notables... 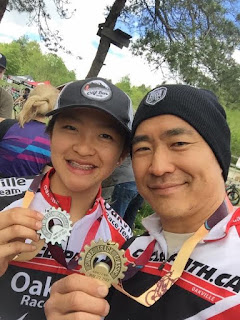 And speaking of other chronic podium finishers...RAF!!!  Again!!  First this time!!

Alas, (good word, that alas...) I was not there.  I had scheduled a training ride prior to soloing the 24 Hours of Summer Solstice.  The word was put out on last weeks post, and on various internets...for anyone who might want to join in such an endeavour.  The plan was to ride from 9pm Friday to noon Saturday...not only to get that longer endurance type ride in...but also to get the night ride experience, and to properly test out lights/equipment.  (The night thing was Giants idea...I would have been happy to make the whole ride daylight, but I am soft like that.)

Actually the night practice was the right call...ingenious even.  A chance to experience the temp change, and make sure you've got the proper clothing...a chance to make sure you have the proper lights mounted in their proper place...and replacement lights properly charging.  An opportunity to experience the lack of sleep...and in this case it was a little more extreme than the race will be.  We were starting the ride at 9pm...when we had already been awake for 15 hours or more.  And ending the ride around noon on Saturday gave us the afternoon to enjoy some daylight camping and recovery... 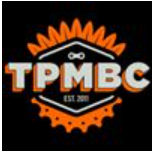 The chosen venue was Turkey Point.  The recent rains (deluge!!) during the week would have most of the 77 kilometres of sandy trails near perfect for riding.  Turkey Point Provincial Park is central to the trail system, and made for the perfect place to pull Team Headquarters into for the weekend. 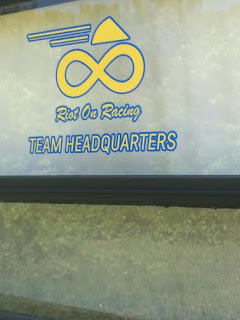 
With a home base...like a solo pit at the race...we would have a central spot to regularly come back to to rehydrate and refuel as we did loops of the trail system.

So...with a few riders answering the call Giant, PowerPaul, and I packed up two trucks, and Team Headquarters and headed out to Turkey Point Friday evening. 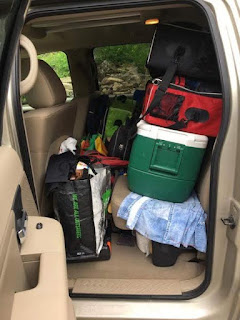 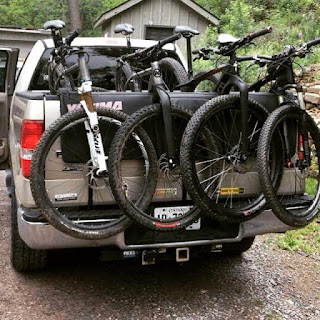 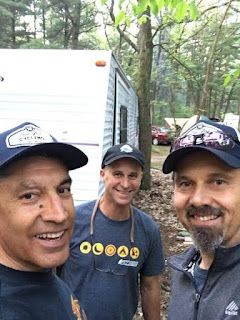 You notice the trailer position to the tree in the background?  Thanks to PowerPaul's trailer manouvering experience, he got us into that spot so the power cord could reach the plug-in (and then I realized I had a plethorah of extension cords in the trailer...)... 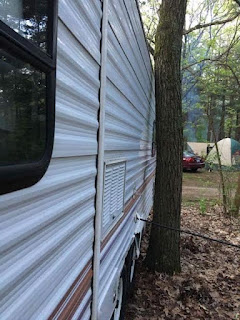 Kevin Eddy met us at Turkey Point to join the ride.  So once the trailer, the bright orange, noticable Kona tent (borrowed form BicycleWorks...thank you!!) were set up, and spare lights charging the four of us geared up and headed out for a short loop just before 9:30 pm.

Short loop...cuz JerryS was scheduled to join us around 10:30pm....so when we rolled back into camp shortly after 10:00 there he was.  And now we were 5.  And the five of us rode through the night...stopping at trail junctions to view the map, learn the trails, and know where we were going so we could loop back to camp in time to rehydrate and eat.  And we made our way back to camp every 1:30 to 2 hour intervals.

For the most part, the trails were mint!  The rains had packed the sand so it was perfectly tacky.  And we rode with nary a serious incident.  There was the odd washout on a particular soft, deep, sandy corner...and the odd slow speed fall over on steep, climby, stall-outs.

There may have been a tree incident on The Burn.  There is a sneaky tree around a blind corner that I was previously aware of because NewfieSteve had smoked it hard on a previous ride...so as we rounded it I called 'watch for the tree!'....then I heard a boom!  (not a TeamColin Boom...)....and PowerPaul say, "Oh, that tree."  He was OK, but he probably still has the bruise.

And I may have gone over the bars contacting a log hiding in the two foot high plants on the Methane trail singletrack...but I landed in said soft plants (that just happened to not be poison ivy)...so all was OK.  Otherwise...not even a flat tire, or a dropped chain!  We were fortunate!

Through the night...ride, eat, drink, ride.  Stops at the junctions were getting shorter (large easy to read trail maps at all major junctions!), as we learned the trails...Turkey Point is so well marked and laid out! 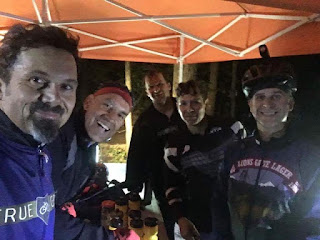 Around 3:30am Saturday morning we pulled into camp.  PowerPaul was calling it quits...and rolled into Team Headquarters to power down.  JerryS also called it...and packed up and drove home (yes...drove home, at 3:30am...I couldn't do it!).  And by now I was starting to feel the sustained effort of the rigid single speed.

So now we were 3...me, Giant, Kevin...back into the trails.  The only trails that were too wet to ride were the ones in the far NorthWest.  We tried...but only Motorhead and Wild Turkey were really rideable....the rest was under water.

At 6am we rolled back into camp.  Kevin was calling it...and he headed to Team Headquarters to call it a night (or morning...).

Now we were 2.  Giant switched bikes.  He was riding his SWorks Epic...but switched to his Fatboy which was newly equipped with 29+ carbon wheels that he was itching to try.  I was tempted to switch to my geared hard tail...but stuck with the single speed.  The single speed is just too much fun!

Meanwhile Giant's brake calipers on his Fatboy had leaked fluid and fouled the rotors so every time he hit the brakes it sounded like a herd of trumpeters trudging through the forest.  It worked for me, cuz by now I was seriously fighting the sleep demons, and I'm sure he woke up half the campers and scared most of the wildlife into their dens, as we rolled out for a short loop.

A short loop cuz Alexa was joining us at 7:30am.  So we hit Big Mike, and Saudwinder before we rolled back into camp.  Shortly after Alexa rolled in...quickly got geared up and off we went.

Now we were 3.  And by now I was hurting.  The sustained effort on the single speed, and now Alexa who can throttle me when she is burnt out (she is a very strong rider!) on fresh legs, was pushing and pulling Giant and I on a couple more final loops.  We finished on Octane...one of the climbiest trails out there (of course...and good one to finish a 14 hour ride with...). 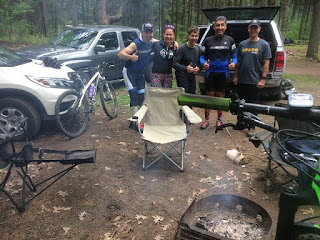 Finally it was time to relax, recover, enjoy an afternoon of camping and watching camp bunnies... 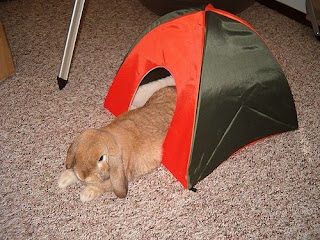 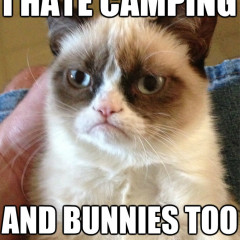 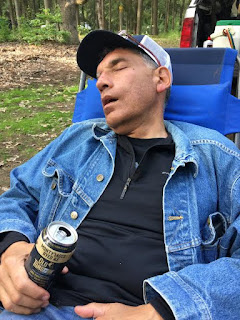 Then NewfieSteve rolled in (he landed from a trip to Newfoundland that morning, packed his camper, his Lisa, his dog, and came to Turkey Point) to round out the weekend (and to make a huge pot of oatmeal for us on Sunday morning!).

This....this is what it is all about!!  An epic weekend to remember.  Great riding...great training...so much fun pursuing a passion, with great friends!  (Many more friends threatened to join...but couldn't swing it)  Can't wait till next time!

What is next??  Probably something... 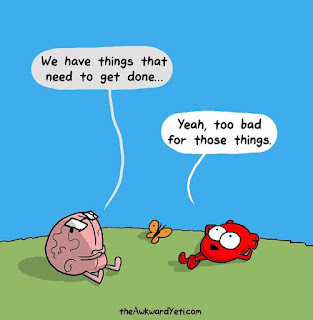