So, on one of our regular Sunday Riot rides, Rick Ross mentions..."Hey, we should do the Cannonball 300 one day." 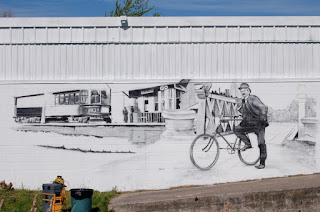 So on Saturday October 19th at 6am...we headed out to challenge the Cannonball300 in one go...to complete it in less than the day.  In case you are not familiar with the Cannonball, it is a 300km route connecting rail trail, gravel, waterfront trail, greenbelt, pavement, and single track.  The route never takes you too far from civilization, for water and food...it is meant to be an introductory bikepacking route.  You can find all the details at https://www.cannonball300.com/     (It is actually quite interesting how the route earned it's name!) 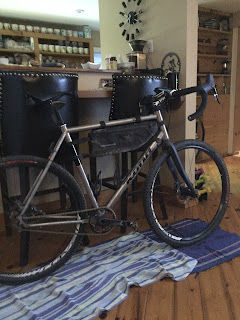 My home is less than 10kms from the start of the route, so Rick and I actually started from my house.  So, at 6am on October 19th, it was minus 2 degrees outside, but it was supposed to get over plus 14 degrees in the afternoon.  We didn't want to be overdressed for later in the day, and be stuck carrying excessive clothing for the bulk of the ride, so we decided to deal with the cold discomfort and dressed more for the warmer weather.

And freeze we did.  The first 100km of the ride was almost all rail trail...which should have meant we could travel with some speed and eat up kilometres quickly.  However, the faster we went the colder we were...fingers and toes were freezing.  So, we kept the pace down...and stopped frequently to warm up... 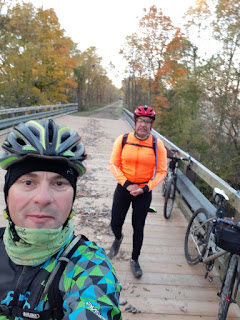 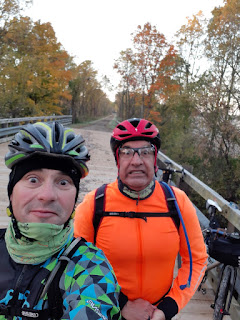 2 - 3 hours into the ride we began to warm up, however we continued at a rather liesurely pace.  We stopped to talk to other bike riders, chat with locals, nature breaks...and to eat regularly to stay fueled.  Mostly, we enjoyed the scenery. 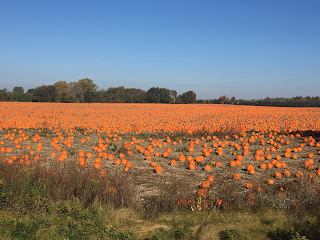 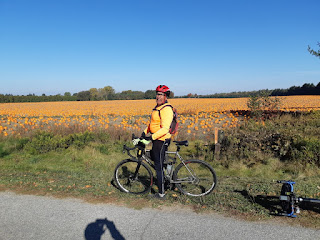 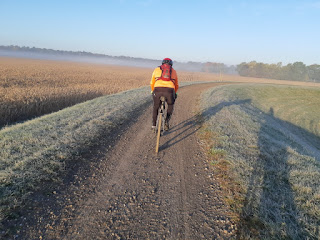 The second 100ish kms were along the shores of Lake Erie...from Port Dover to Port Colborne.  Literally along the shore; so close my garmin map showed us riding in the water...and the scenery was spectacular.  Lake Erie is as clear and blue as pool water...without the bleach and chlorine.  Nature's beauty. 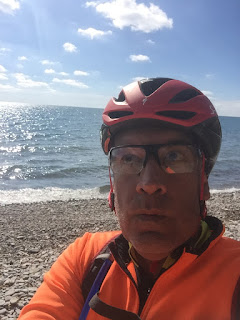 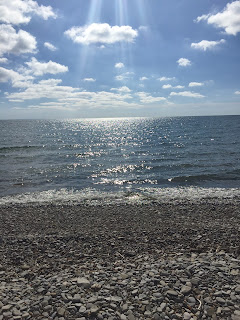 As we got closer to Port Colborne the route included several stretches of very gnarly ATV trail...which kept our pace a little too slow.  Eventually, we realized we were going too leisurely, and we still had a loooong way to go.  So we picked up the pace...we were going to end up riding for a while in the dark.  But we were prepared with lights. 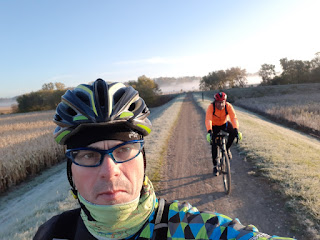 The route took us north from Port Colborne, through Welland...and a gravel route along the Welland Canal...the Canal is not attractive scenery....but it is very cool! 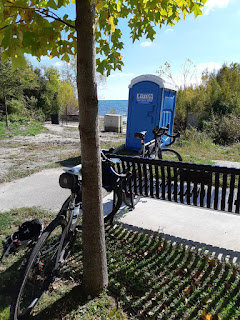 Anywhere can be considered paradise under the right circumstances...


Then trough Thorold and St Catharines...along gravel and cool single track...it was now dark and getting tough to see.  In fact, Rick took a tumble as his front wheel found a rut in a gravel descent.  He was OK, but he broke his shifter.  We were now both single speed...and it was clearly time to have the lights on.

By now we were hammering as much as possible...eager to make up time.  Through campgrounds, and Balls Falls conservation area...being more careful on singletrack.  Then onto the pavement through the twenty valley winery area...I was a little worried being on the road, but we had blinky red lights going, and 1200lumen headlights blazing...and there was generous bike lane for the most part.  Rick was full on hammering in this section, I was redlining to hang on...Rick is one tough, talented endurance rider!!

A long climb out of the twenty valley, along Ridge Rd by Grimsby, still hammering...in the dark...onto the Dofasco Trail...sketchy sections, especially on gravel bikes...but fun!!  Over to the Devils Punchbowl...an amazing lookout...the top of the escarpment overlooking Stoney Creek and Hamilton and Lake Ontario...spectacular.  We were within 30km of home...eager to finish...but we took time to enjoy the view.  Besides, my single speed power muscles clearly needed the rest, and stretch.

Then into some of the more climby trails of the Red Hill trail system...no hammering in here...but then it came out onto the Escarpment Rail Trail...more opportunity for speed and cover kilometres here...into downtown Hamilton...so close to home.  Before we knew it we were done...home!!!  320kms...15hrs of riding.  The strava data here. 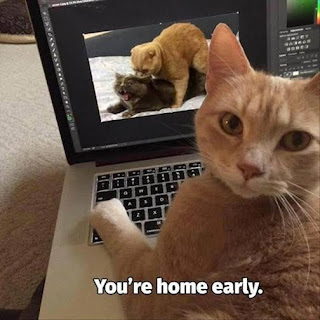 At least Lois was glad we made it home... 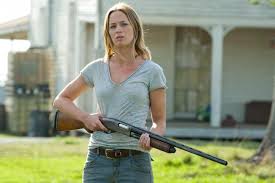 While it was a challenge to do this route in one day...especially at this time of year when the days are shorter..starting in the dark, and finishing in the dark...it was meant as a bikepacking route.  It would be a hoot to camp out along the shores of Lake Erie...or at any one of the many campgrounds along the route.  And to stop to enjoy the food and drink at any one of the local establishments.  To take the time to properly enjoy the views.  Next time...

Likely the last 'ultra-ride' of the season.  I hope...   I need to work on more intense, short ride fitness...so that's the plan for now.  I think...  Ah....one ride at a time, especially at this point in the season. 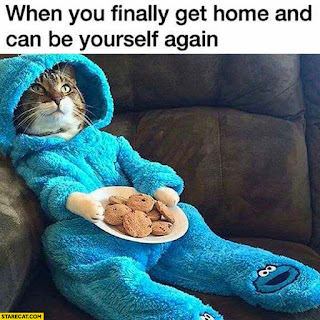 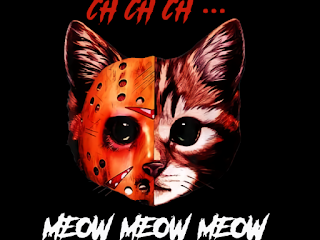