So, on September 29th the Turkey Point Fall Ripper was on...a ride to celebrate the fine Turkey Point mountain bike trails.  I did not sign up but several friends did, so that morning RickRoss and his spouse Chris and myself set out on our cross bikes to stop in at Turkey Point, say Hi, and ride back home. 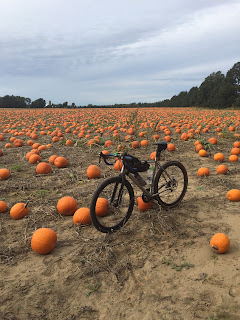 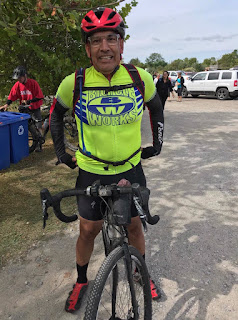 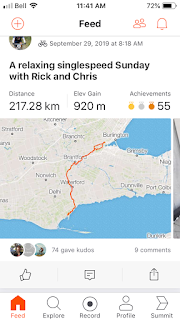 It made for a very nice 217km ride.  Rick is an exceptionally strong and talented mtb/gravel rider..even more impressive is that he is diabetic, requiring monitoring his blood glycogen levels, and constantly (literally, constantly) eating to maintain those levels. 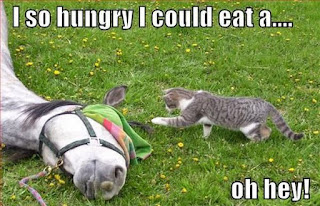 Anyways, along that ride we discussed long rides we had done, and I mentioned having done the BT700 in July.  (I posted a blog about the BT700 here.)  That led to discussing that Matt Kadey (the progenitor of the BT700) had recently put together a new 350km route.  The GNR (the Grand Nith Route); a route tracking along the Grand and Nith Rivers.  Apparently Rick's friend RobF wanted to do the GNR, so Rick and I determined that the three of us would do it.  As it turned out...we would do so on the next weekend!

So, the GNR officially starts and finishes in St. Jacobs...however, the route passes within 5 kms of my house.  So, on Saturday October 5th Rick, Rob, and Riot departed from my home at 7am to get onto the GNR route on Sydenham Road in Dundas...and onto the Hamilton-Brantford Railtrail. 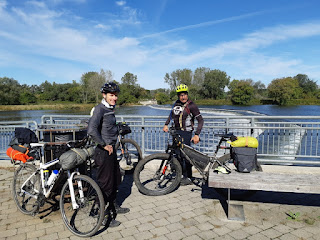 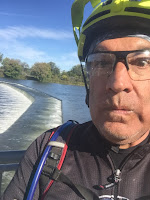 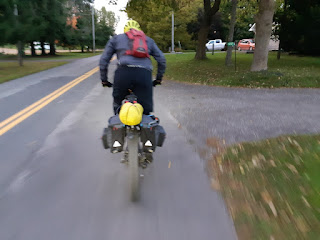 The route took us up through Paris where we stopped for a sit down lunch and one Adam Frederiksen met us and guided us through the local trails that were part of the route.  Glad he did....could have been confusing otherwise...the trials followed the Grand River, but there were various offshoots and side trails.  (Adam had also ridden the complete GNR...and Cannonball...earlier in the season).  I have to emphasize the Paris trails were great!!  This was my favourite part of the route...the trails a great combination of technical, twisty single track....rocks, roots, and punchy climbs...my 29+ was perfect for these trails.  Adam had limited time to ride with us though...and soon we were on our own again. 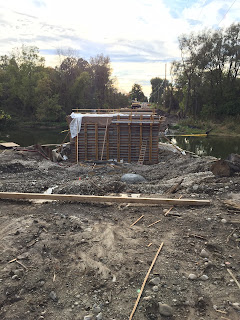 The route took us north through the town of Ayr, then west up to a bridge that was out and impassible across the river, so we had to take a bit of a detour.

The route then turned north, following the river...some trail but mostly gravel roads.  Daylight quickly began to wane and we were soon riding in the dark.  It was time to find a place to camp for the night.  That ended up being at Nith River Campground...more of an RV park with seasonal camping but there was a day camp site right near the washroom/shower facilities that ended up working out great.  172kms into the route.

It was supposed to rain overnight, so we quickly set up camp...cooked some dinner, and hit the hay...with the intent to get going again by 7am. 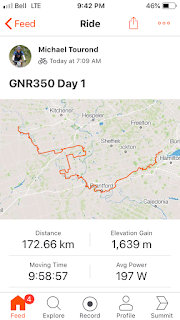 I woke at 5am to the sound of a couple of intermittent rain drops.  I quickly packed up my camp which was only a tarp, sleeping pad, and bag...I don't like the hassle of a tent for single night set ups.  Rick and Rob both had tents and got wet while the rain fell as they packed their tents.  I hid out in the large covered porch of the facility next to us, and cooked a warm breakfast and coffee.  The rain poured for over an hour then began to let up as I finished packing everything back on my bike.  Rick and Rob took a while to pack while trying to dry their gear but by just after 7:30am we were back on the gravel. 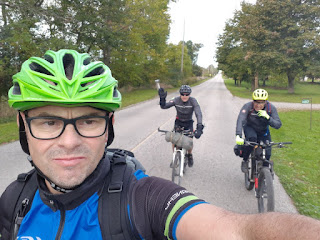 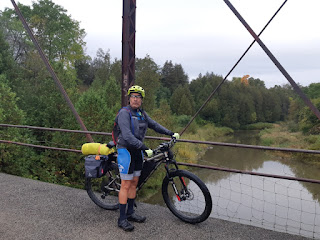 And mostly gravel it was...all the way to St Jacobs...where we stopped for a sit down brunch at the Eco Cafe.  There was some pavement on this part of the route too...to link up gravel bits.  Rob put the boots to us with his skinny tire commuter set up on the pavement on gravel...but we made sure he paid for it when we hit trails.  We are kind like that... 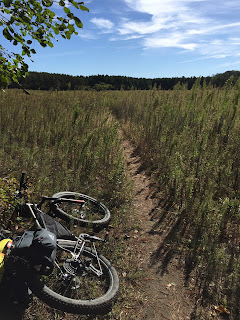 Off of some technical (rocky, rooty, climby) riverside trail
where the single track veered off through a meadow, so we stopped to eat
and wait for Rob to catch back on.


The part of the route from St Jacobs through the Kitchener-Waterloo region included a load of double track that wound through many of the local parks and camps along the riverside.  Very, very cool riding....but very, very climby!  Long steep climbs...followed by long swoopy descents...one after the other...literally a series of hill repeats.  The long flowy descents though, almost made the hill repeats fun...almost...on loaded bikes after almost 300kms of riding.  (Keep in mind if we had started this ride from the 'official' start point these trails would be closer to the beginning of the route.) 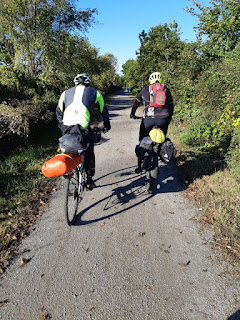 We were joined by Ana Maria Bogatan...a local mtb-er to help guide us through a stretch of these trails.  It was great to have friends join in.  Especially locals familiar with the trails...thanks Ana and Adam!!

Part of these trails led through a cattle pasture.  And today the cattle were directly on the trail...sitting peacefully chewing away...tossing us the occasional gaze as we rode through...even the big guy.  This was so cool!! 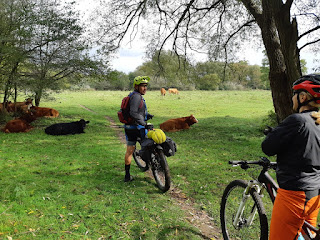 These trails eventually lead to the Cambridge area where a bit of road and gravel took us through the Puslinch trail system  (Puslinch is a great trail system, a mix of flowy twisty single track, and gnarly challenging punchy technical climbs...built on a gravel quarry so the recent rains drain and dry up quickly).  The GNR route takes one mainly through the fireroad/double track that leads through the centre of the trail system.

From the Puslinch trails the route is gravel and pavement to the LaFarge trails.  The LaFarge trails...double track/fireroad.  But if you want some of the steepest, loosely gravelled, rutted from the rain climbs on a loaded bikepacking rig...here you are.  Challenging, tough, exhausting on any bike... 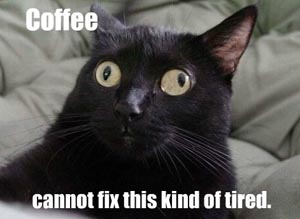 Then its a road blast down Middleton road...it was now dark, and getting late...we pushed it hard..very hard, on the road sections to get 'er done...and to limit road riding in the dark.  Middleton road lead into the Christie Lake trails.  The trails here were still soft from the rains (it looked like it rained much more here than it did at our camp site)...so we stayed off the soft trails not wanting to cause trail damage, especially with Rob's skinny tires.  Instead we sped through on the fireroad that leads through the trail system.  We were almost done!!

The Spencer Creek trails lead to our end of the actual GNR route (to the point where we jumped in)...and from there it was a quick 5km road blast home!!  Where our spouses had met to wait for us.  (I use a SPOT device that has a share page so friends and family...and whoever else...can track our progress on these rides...).

We were whipped...exhausted...done...toast.  But we had completed the GNR.

Thank you Rick and Rob for the ass kicking!  Thank you to our spouses for letting us come back home!  Thank you Adam and Ana for the guiding!  Big thanks to Matt Kadey and Tabi for putting together amazing bikepacking routes...this has to take unimaginable amount of time and effort!! 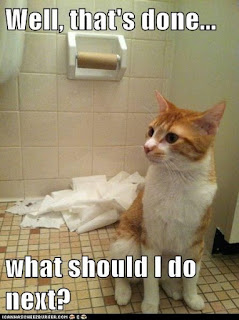 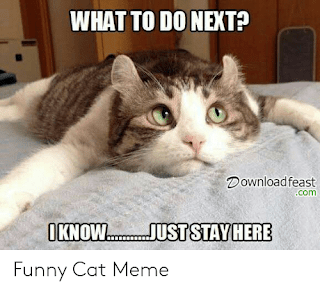 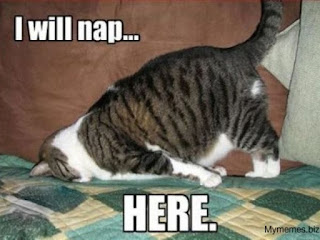