BT700 - A Ride, An Adventure, An Experience; Beyond Epic - Part One

There are so many words, so many pictures, I will do my best to sum up this experience in a less than novel-ic blog post.  (OK...I failed so I have made it a two parter...)

The BT700...a 700 km tour starting at St Jacobs, Ontario, heading north through the Mennonite farmlands to the shores of Lake Huron, east to the Blue Mountains, south through the Beaver Valley and further through the Oak Ridges Moraine, then back west through the Albion and Caledon Hills back to St Jacobs.  All through various rail trails, gravel roads, and single/double track trails.  A route highlighting gravel/mountain bike riding options and the variety of central Ontario's geography, forest greenery, agriculture regions, river valleys, escarpment and great lakes views.  Seriously world class.  All put together by an unbelievable amount of research and recon by one Matthew Kadey, an experienced gravel-bike packing cyclist with an obvious intense passion for the experience...and a desire to share.

When I first became aware of this tour, I knew it was an immediate must do.  The question was how to approach it.  Should I do it as a racer, packing minimal necessities to stay light and fast, riding through nights with minimal sleep to get done in as short a time as possible?  Or do it as a tourist, packing full sleeping gear, tent, food, stove and taking my time to take in the full experience of the route, the views and the various small towns??

The previous week, my friend Hal and I had bikepacked up to Kincardine (220kms each way), and back.  Hal was also doing the BT700.  The two day Kincardine trip worked out well...we didn't get on each others nerves too much...Hal was ok with me blasting out obscure 70s and 80s songs (yes, with my own voice), and talking to farm animals as we passed by.  So we decided we would do the 700 together with the intention of doing it in 4 days.  Not racer fast, but more like fast tourists; riding as steady as possible during daylight...bringing lights but not intending to night ride unless necessary.  We planned to minimalist camping at night (I brought a bivy bag and a tarp), and take the time for pictures and admiration of points of interest along the way. 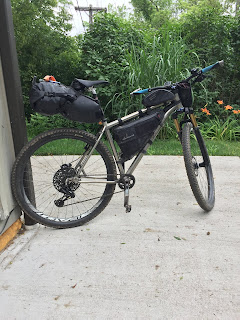 Hal`s Saturday evening prep proved we weren`t serious
about race pacing this one.  (OK that`s milk in the jug...)

The Grand Depart was scheduled for around 8am...however we wanted to take advantage of as much daylight as possible so we rolled out sometime between 6:30 and 7:00am. 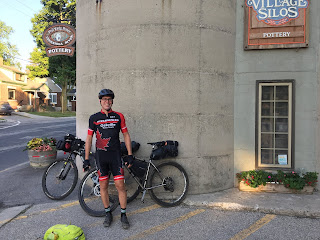 Hal at the start line...

I noticed early into the ride that my newly rented SPOT tracker was not staying powered, it would start then power off in a minute or so, so after a bit of fiddling I took the time to change the batteries...still no luck.  I plugged it directly into a power pack (I brought two 10,000mA power packs to keep phone and garmin charged), it still would still not stay on.  Something was buggered with it...so I did away with it, and texted the situation to family that might be tracking me so they wouldn't worry.  Enough time lost to this problem...on we went. 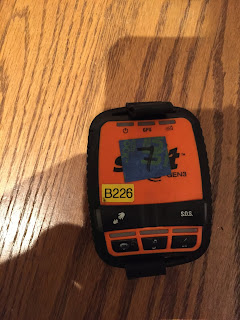 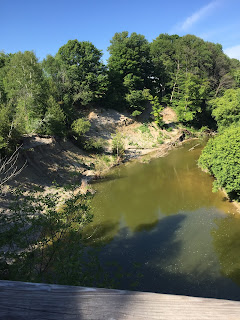 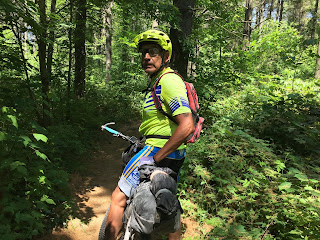 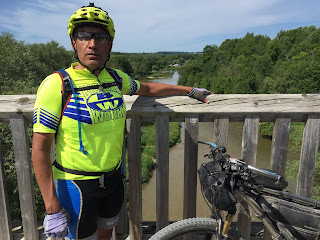 Some of the scenic (sorry I`m in the way!) sights along the way...
there were so many, and my pics don't do them justice!
Where is Apex Ted when you need him??

At the 175km mark we hit McGregor Point provincical park on the shores of Lake Huron.  The trails system here is extensive with multiple offshoots of side trails of single track that made navigation a challenge, so there was much out and back trial and error navigation to stay true to the planned route.  Extra mileage was put on here.  However the multiple views of the lake made it worthwhile.  The beaches and incoming waves of Lake Huron would have you believe you were ocean-side!  Seriously, the views on this entire 700+km route were so impressive...and they started here on Lake Huron`s shore.  An extensive ride down a lengthy boardwalk required us to walk the bikes with the volume of pedestrian traffic on a hot Sunday evening.

At around the 210km mark, we hit Southhampton where we had planned to camp for the night at Denny`s Dam campground.  However, it appeared that this spot had been shut down and signs alerting that there was no camping allowed.  So after a bit of riding/scouting around we found another camp spot and at 222kms we set up camp.

After a rather good night sleep on an open bivy (Hal had a small bikepacking tent), we woke and boiled water for coffee and breakfast.  A little more leisurely than planned, we were hoping to get rolling again by 6:30am or 7:00, but by the time we ate, and packed up our dewy gear it was 7:50am.  (I brought my own pre-mixed breakfasts and dinners that were good to be coldsoaked or hot water added). 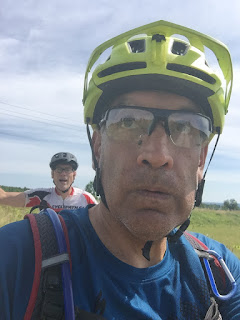 The day started on gravel road and the Georgian Bluffs trail for about 50km into Owen Sound.  In retrospect we should have continued yesterday`s ride to include this section, as it was mostly flat, easy and fast.  A point to remember for next time. 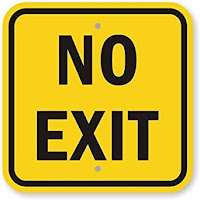 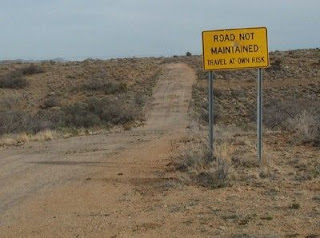 Past Owen Sound the bulk of the ride was on rough gravel roads, and very rough trail.  In the heat and humidity of the day the main challenge (other than keeping pedaling) was to make sure we kept our water and food supplies topped up.  Tim Horton`s and local convenience stores became our best friends to keep camel backs and bottles full, and to pack as much `food` as we could fit on our bikes. 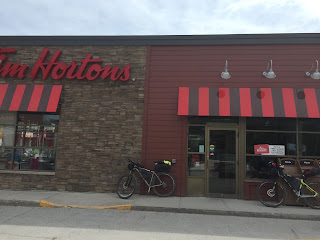 The heat and humidity...clearly added to the challenge of this ride.  Many times I pulled up to a convenience store with empty bottles and camelback...staying hydrated was key...the heat was intense reflecting off the gravel surface...the humidity oppressive when we were in the forest. 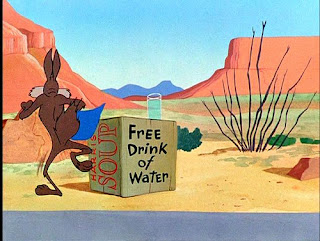 We were always on the lookout for water stops.
Keeping topped up was key!!

Then it started to rain...which was a relief from the heat...but there was thunder and lightning on the horizon.  As we rolled into the town of Thornbury around 3pm we decided to stop at a local pub for lunch and see if the rain would let up or pass.  As one cider/beer led to another, more riders rolled in to eat/hydrate and wait out the rain. 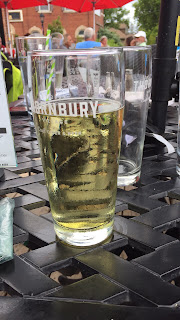 However, the rain did not let up, and the lightning storm slowly rumbled closer...so after ordering and eating, sharing stories with other riders, and more beer/cider, we decided to play it safe and found a cheap, but clean hotel (Penny`s motel in Thornbury!!) for the night.  (Besides, I don`t think Hal was in any shape to ride at this point!) 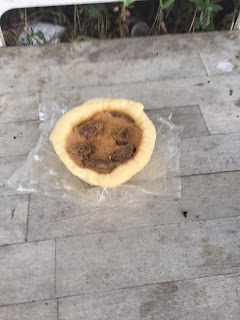 There were also buttertarts...of course!!

It was a good call as the storm raged for 2 or 3 hours throughout the night.  The motel was full with other riders who made the same call.  But is was almost a half day of riding lost...

Heat and elevation, with a bit of an adventurous side story would be the story of this day.

We got going rolling out of the motel, stopping at the local Tim Horton's to load up on food to get us through the day.

The temperature would reach the mid thirties, with the humidity taking it into the low forties.  Out on gravel roads you not only got roasted from above, but baked from the heat reflecting off the road...in the forest the humidity felt like riding in the depths of a swamp. 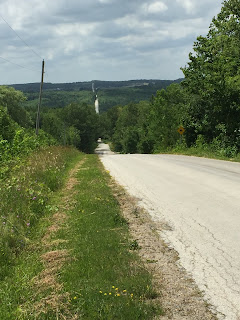 Relentless...but my camera and my pic skills don't do it justice.
Where is Apex Ted when we need him??

And when the route dove into the forest and you thought there might be a bit of relief from the climbing the route presented you with a looong loose rocky double track climb...so steep I often found myself in my 12 speed granny gear.  These forest climbs also embraced the humidity but to add to the suffering the lack of breeze made it a haven for the black flies, deer flies, and horse flies...all happy to feast while you slowly struggled up the climbs...even crawling under my camelback.  Fun times here.

The extreme heat made it imperative to stay topped up for hydration...we had to venture off route, adding additional mileage, in order to find water sources.  As in this stop in Flesherton...a few kms off course...then return to the course at the point of departure. 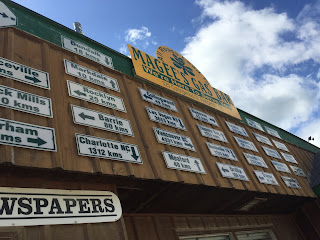 Small store in Flesherton...showing us the way?? 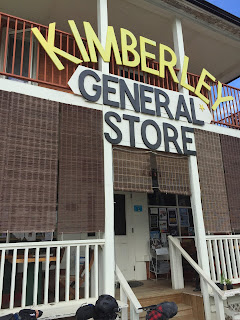 Be aware if you do this route, many small town stores and
restaurants are closed on Monday and Tuesday...
I guess since they are open all weekend.
We found this out the hard way!

And the morning breeze became a stiff wind...usually a head wind of course.  This was indeed a day made to test the suffer metric. 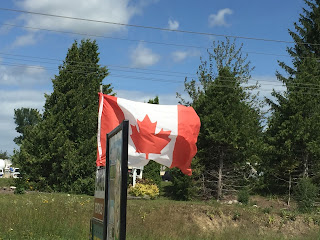 The headwind was substantial...this flag standing out straight.

Hal developed a slow leak in his rear tire.  And after 4 or 5 stops to pump up the leak Hal decided to insert a tube... 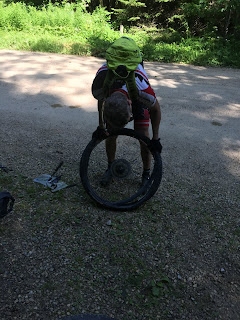 New tube inserted, and a bit of coaxing to get the tire seated properly, but it all seemed to be holding, we were back on our way.  For about another 20 - 25 kms...until finally on a flat section...we noticed the tube bulging through the sidewall...a quick stop and air release to ensure the tube didn't burst.  Inspection showed that the bead of the tire had split from the sidewall...not good at all.  As a last resort, we booted the tire with a $20 bill (all we had on us at the time). 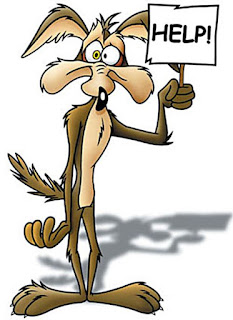 As we worked on the situation, a fellow BT700 rider came up behind us.  I don't know if I ever got his name, but he was from Cambridge and riding a rigid gravel bike.  He was really struggling with the heat and the climbing, and as there wasn't anything he could do to help us, he mentioned that he was going to wander on and find a small town to have lunch and try to recover to complete the day.  Off he went.  We eventually got the tire booted, and re-inflated...enough to find a medium pressure that would prevent pinch flatting...and not burst the boot...very tricky.

Then on we went...the fix appeared to hold.  Hallelujah...but we would keep a close watch on it.

As became a matter of course on this route, I would drop Hal on the climbs and he would catch me on the flats. 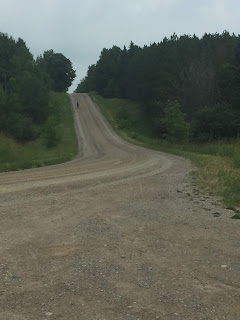 Hal, speeding down another hill...

As we continued with the repaired tire, the dropping on the climbs became accelerated...then at a point about 20kms into the most recent repair...Hal wasn't catching me...I looked back.  No Hal.  I turned around and rode back...still no Hal.  Finally, there was Hal...limping along on a flat tire...riding gingerly as to not damage the rim of the wheel.  A quick, "I'm f...k'd" summed up the situation.  There were no more options...a new tire was required.

We noticed someone standing on the deck of a nearby farmhouse...

This story has taken too long to tell...let's end this chapter for now...

Will Riot and Hal survive to ride another day??
Will the person on the deck shoot at the Metis and the Judd??
Will Marvin's bomb make a 'Kaboom'??

Stay tuned for the next post to see if our heroes (heroes???) find a phone booth!! 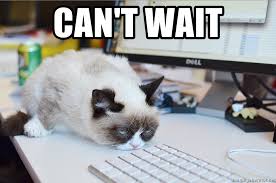