What's Been Going On?? It's Been Awhile!!

Well I guess I have procrastinated on putting off delaying (???) this post long enough that I can't really call it a review of any race...but TeamColin has been blog posting so I guess I should.  So here are very quick re-caps of what has been going on this spring and summer...

Always a true test of spring fitness levels.  Held at Mansfield Outdoor Centre where the sandy trails stand up to a variety of conditions, and are in fact, better when a tad wet; which it was this spring.  Plenty of roots...and plenty of hills on these trails.  But this year, it seems the folks at Chico Racing went out of their way to include every rooty climb in the trail system...and then found/made a few more just to add to the fun/challenge.

Seriously, with 250m of rather technical climbing every 10km lap, from very steep to long and grinding, it was a serious single speeders challenge.  Actually, for me the start climb is the toughest...although it's wide open fire road width, it's so long and relentless, and either soft sand or loose gravel, by the time I get to the top I'm redlined.

I'd been riding fairly consistently throughout the winter (yay for fatbikes!!!), but I still had no idea what kind of endurance ride kind of shape I was in.  After the first couple of laps I settled into what I thought was a proper 8 hour pace for me.  I paid zero attention to the 'scoreboard' during the race...just intent to enjoy the day and put in as many laps as I could muster.  (Meeting other solos along the trail, and having JennR chase me down, or push me for the final half of the day).  However, at the end of the day, with 10 laps put in; I realized I wasn't totally trashed like I should be, and usually am at the finish of a race.  Which meant I could have, should have, set myself a faster pace and had a better result.  (You may ask why I didn't recognize this during the race, but all the climbing had me concerned about flaming out at any point...which didn't happen...and good to know for future races this year.)

No podium spot for me this year...this time...but for me a great day... 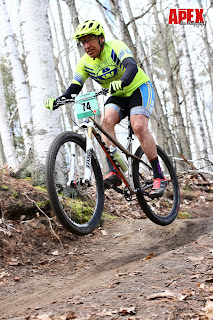 And ApexRacePhotography was on course.
Ted at his best making even me look fast!! 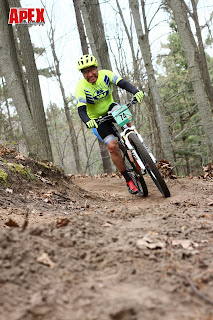 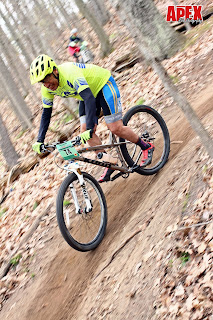 Another Chico Racing classic.  I had the unfortunate circumstance of crashing hard on a gravel road ride just 7 days before this event.  A broken road helmet and severe road rash on my knuckles and up the right side of my body from my knee to my shoulder threatened to keep me from participating in this years Solo 24.  But the road rash was nicely scabbing over (yum, eh??), and any possible concussion symptoms had subsided (a doctor visit resulted in only a tetanus shot) so on Friday Jonny (who was also solo-ing so we were sharing a pit) and I headed up to the race venue at Albion Hills Conservation Area to get set up.  We had planned to race unsupported (no assisting back up crew), but MarcS showed up...he was supposed to be racing but had very recently broken his thumb in a crash...so he offered to help us out with support.  What an amazing help Marc was!!  Marc has solo-d the 24 HR before  so he knew when we should eat, what we should eat, when we should rest...all the stuff that an endurance racer doesn't always make the best decisions on in a glycogen depleted brain  fog!!  So many sincere 'Thank yous' to Marc for the help!! 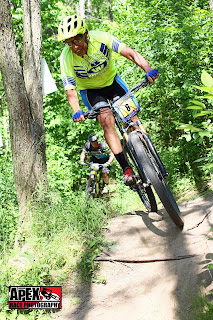 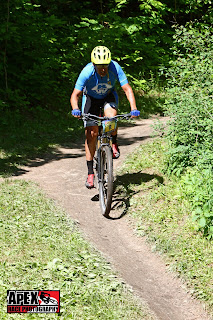 Different jersey, trying to stay fresh through the 24 hours. 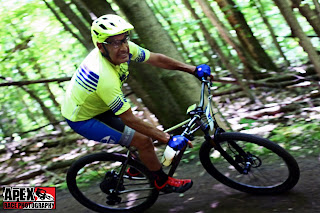 
Race day Saturday was perfect weather...there must have been close to 3000 racers entered into this event.  It really is a classic, and so well run by the folks at Chico Racing...they have been doing this for 100's of years (well alomost....) and have it down to a science...an art even.  It sells out early every year (by February).  There were 50 of us solo-ing....with 13 entered into my age category (male age 50+)....and at noon sharp the start gun went off...we were a going!  I settled into a pace early...with almost 300m of climbing per 17km lap, the plan was to survive the climbs, take advantage of the long very fast downhills, and recover-eat-hydrate on the flats.  With two of the strongest endurance riders I know in my age category, DaveS and KenW, not entered in this race cuz they were doing a little thing called the Tour Divide, I thought I might even have a chance at the podium on this one. 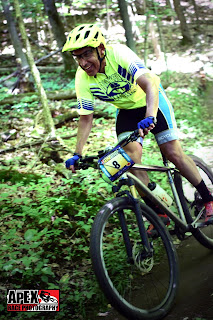 So for the first few hours of the race I saw myself battling between 3rd and 4th place with Andy (a racer with the team Lapdogs).  I would pass him as he took long breaks between laps then he would rail past me somewhere further up the race course.  Then somewhere during the night laps I had begun to develop a headache.  Not knowing the cause exactly...a result of energy/electrolyte depletion, or a recurring concussion symptom from my previous weeks crash, Marc suggested it may be a good idea to have a sleep and see how that would work out.  A great call I might not have had the faculty to make on my own.  So...a couple of hour nap...headache was gone.  Get some fuel back in me....and got back out into the race. 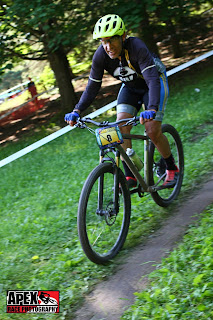 Well the nap may have saved me a few much needed brain cells...but I had now dropped to seventh place.  So I just proceeded with the intention of just finishing up the race at my pace...it was still night time...about 3am...so I planned to ride careful...I'm not a big fan of night riding...I can crash just fine in the daylight.  For a solo racer, it's when you hear the birds start to chirp their morning calls that you feel a wave of relief knowing daylight should be coming on the next lap...and you can do away with the lights on the bike and helmet.  So, on I proceeded into the sunrise and onto the morning.  Approaching the noon finish I was struggling...the pains of riding for that length were starting to take hold...my lap times had dwindled to 1hr44mins for my last two laps.  Very slow, just pedalling to keep going...survive the climbs, take advantage of the downhills, recover on the flats...just slower than before.  Then near the end of the race time, I pulled into my pit to fuel up and stretch before heading out for one more lap to end the day.  And Marc mentioned to me, "Hey Mike, (he forgot my name is Riot) you know you have worked your way back up 4th place...In fact you are only 10 minutes out of 3rd."

What??  What??  Making up 10 minutes at this point of the race, and in my depleted state was a near impossibility but I knew I had to try...so off I went...blazing like a tortoise!  Pushing through all the hurts...doing my best to hammer up the climbs...and push on the flats...no need to save and recover now.  It was my buddy Orville I was chasing...Orville was in 3rd place.  I had met Orville at the previous years 24HR race.  Orville is a surprisingly fast mountain bike racer...surprising because he is built like a football halfback...one strong dude!  When he stands up to push his single speed (yeah...single speed!), he is gone!  Well there he was in front of me!!  On a looooong grassy double track climb....just ahead of me.  I passed him on the left...and said, "Hi Orville" as I passed.  At his point I didn't know if he knew I was in 4th pushing him for 3rd...but he must have because he responded with, "Dammit, I knew it!!".  And as we dove back into some single track, he was hard on my tail.

At this point I was wrecked...I had drawn on everything I had to make up the time gap and was now working on fumes.  But Orville must have been saving some gas in the tank...as we approached a long loose gravel road climb...BOOM! (as TeamColin says!), Orville stood up and he was away!!  I struggled up the climb in some wimpy granny gear....then back into single track...I pushed hard!  And pushed harder!  My hamstrings started to cramp...then my quads...and my lower back started to lock up....but I pushed through.  I felt like I was going fast, and expected to see Orville around every next bend or climb.  I actually wondered if I had passed him without noticing...but no.  As I pushed up the last stupid little rooty climb to the finish...I was done. I tapped my computer chip on the reader pad, my leg muscles weren't working right...my brain was as foggy as Johnny Cash on a Sunday morning.  If there was time to do another lap...I couldn't do it.  Orville had finished 4 minutes ahead of me, he's an athlete to respect!  He took 3rd place, but I think I made him earn it.

So...how does one recover from solo-ing a 24 hour?  Usually with about a week of rest, or very easy riding.  But...I had gotten into bike packing this spring...and I totally enjoy it!!  Combine mountain biking...or gravel riding, with camping...what could be better?? 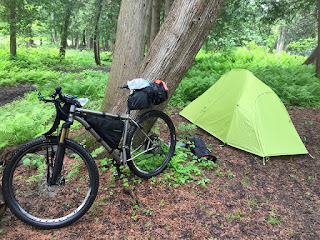 So, that's what we did...and many hurts were had...and good times.  Especially riding 4 hours in an extreme thunder storm on the way back on the Friday.

Oh...and apparently this is now a thing... 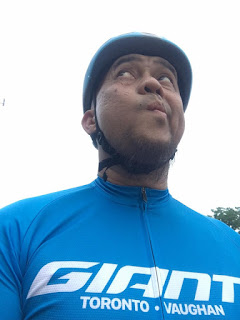 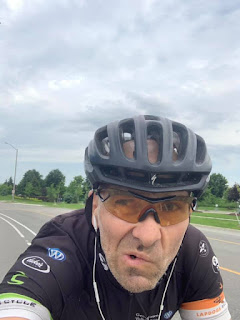 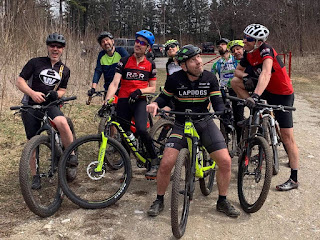 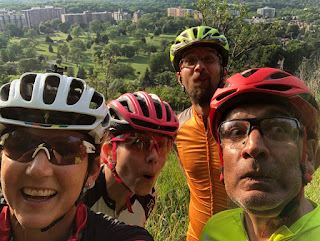 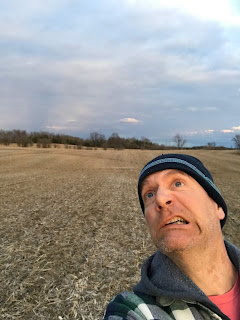 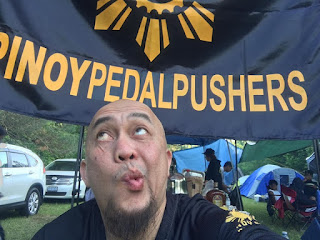 And some have it perfected... 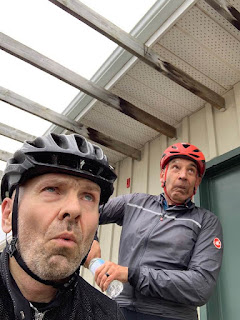 I think only my buddy Jody has figured it out...that the Riot smile was inspired by Bob and Doug Mackenzie...the two hosers eh!!

Anyways....sorry about the long post...there is so much more I could include...like how Jonny killed his first solo 24, how Sarah kills every endurance race, how JoeM destroyed his first 8HR solo, Jouko and Robin attacking the DirtyKanza, NatalieT crushed her first 24 solo.  I'll try not to be such a procrastinating cat from now on... 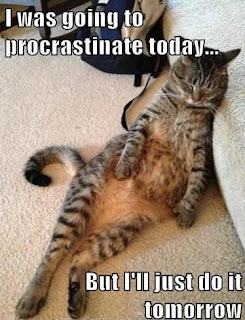 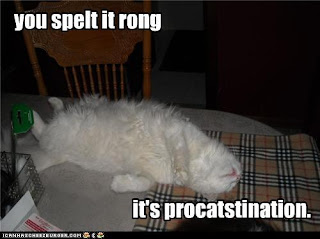 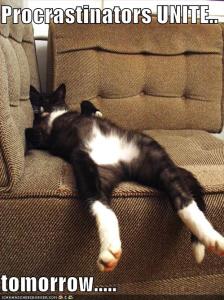 Anyways...So whats up next for me??
There is a little ride called the BT700.  It's new.  720kms.  It's happening this weekend.  Hopefully I will report on how it goes before next Christmas.