Well...a little late...but that is how procrastination goes.  But wait....

So...two weeks ago (April 13th)...Substance Pojects first race of their XC Marathon series happened at Turkey Point.  Turkey Point, becoming a MTB Mecca...especially for early in the season where everywhere else in the world is still saturated, the sandy based trails here are primo...actually awesome even!!

And there is a winery nearby!!  Which is where Dan (Dan of Substance Projects) had the race start and finish.  (Smart that guy is!!). So...instead of a long winded, boring, detailed version of the race (which I can now barely remember cuz it was so long ago...) let's go with more of a brief re-cap. 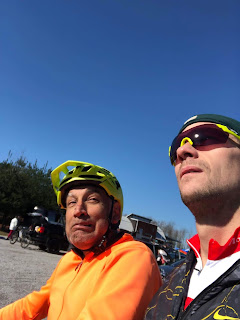 Me and Rusty...ready to roll?? 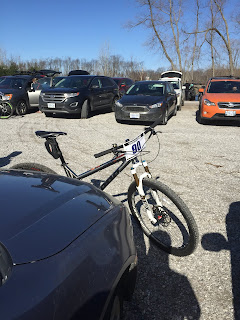 Well...at least my bike seemed to be ready...

We arrived to see many of the familiar faces, fellow racers and organizers...friends, competitors, lovers of the sport...it was like a homecoming it was. 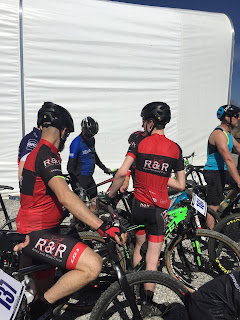 SleevelessAdam (even in the winter races...seriously!),
Jonny, Grant, Richard hiding... 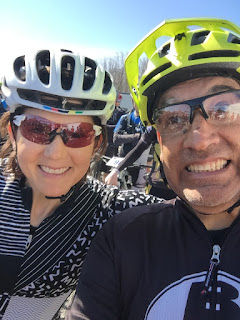 Then a bit of a warm up...(there is never enough of a warm up for me...it literally takes me at least a full hour to properly warm up). Plus...I needed to test how my back felt.  I had taken a rather harsh fall on a very long rock garden of a trail 3 days prior.  My back was still very bruised...very stiff. 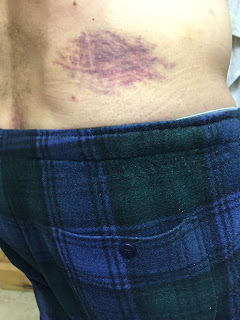 Sorry...should have warned about that view...

So into the start corral (moo!), where there was a mix serious intense racer types, folks looking to have fun and enjoy the trails, and some like me, observing while looking to push ourselves while enjoying the day.  And I wanted to ride safe...make sure not to fall on my back again...there is an entire season of racing to come. 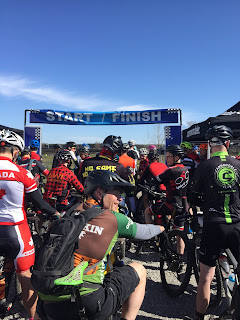 
Then after Dan's required blah, blah, blah, we were off.  I started off too hot...each right legged pedal stroke with any kind of power was accompanied with a stabbing reminder up the right side of my back...so I eased off and just rode...or tried to ease off.  Dan's course had a few punchy climbs, at least for a heavy single speeder, that required more effort...and whatever power I could muster.  As I continued the discomfort diminished and after an hour or so it was mostly gone...and I was able to actually go at race pace. 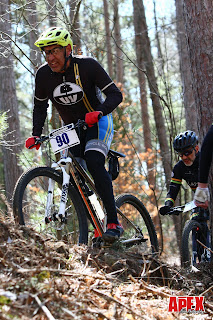 And Ted and his crew (ApexRacePhotography)
were out there...caught me grimacing
through one of the climbs.

Actually, check out this progression of Ted's pics...as I recognized him as I rode by... 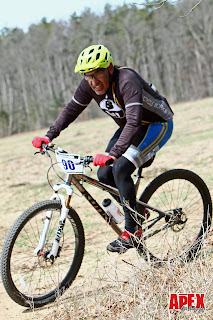 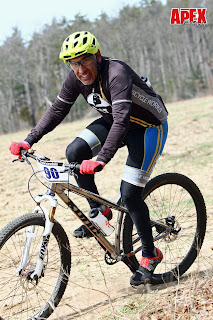 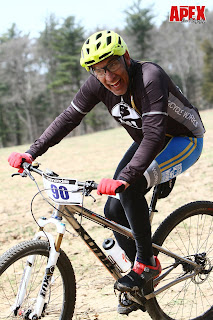 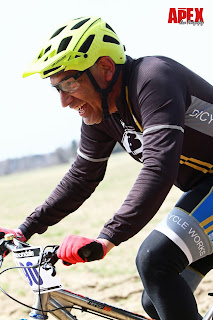 But at this point, I was an hour into a 40km (2 to 2.5 hour race)...so my race was effectively over...and I still wanted to make sure I didn't fall again.  But the trails were awesome...conditions were pristine!!  And the TP trails are just plain, all out fun!!  So much flow!!  Over a small hill at speed, down into the rooty drops on the trail 'Pile Driver' were a small reminder to be careful.  But for the most part I rode out the rest of the course in full out race mode. 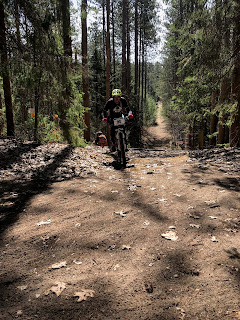 Topping out one of the climbs,
there was NewfieSteve and PowerPaul taking a couple of pics as I went by...
laughing at me.  (They were not racing on this day).
Laughing either at my discomfort, or how slow I was going... 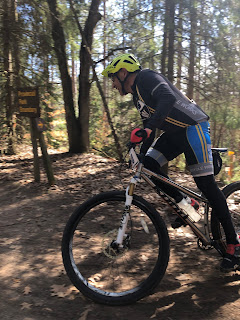 Either way it was funny...and I just had to laugh back.
It was cool to see them there.


I finished off the race chasing down a fellow single speeder, Marc, who had come into view; and crossed the line with a finish time of 2hours24minutes.  I was last of the 11 single speeders entered...but I was safe and happy! 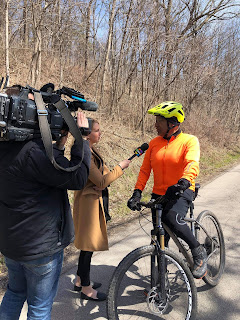 
Dan's races are always amazing...great race courses...but mostly it's the fun, relaxed atmosphere.  It seems that no one really takes themselves too seriously, and the main goal is to enjoy the day.  It's always a great experience...even if Dan always has a poke at me for my propensity to get lost (one time!!!...OK...maybe twice....or three times...but hey!!). 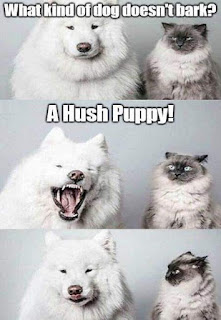 Anyways...it took me so long to write this review/blog, that Dan's second race of his Marathon Series already happened.  (April 20th) I didn't race this one...so no review.  Sorry Dan.

And the iconic gravel?? race, the Paris to Ancaster is happening this weekend.  I'm not racing that one either.

I guess I'm saving energy for one of these two upcoming races.  But will have to choose...they are both on May 11th!!

The Epic 8 Hour Spring edition...promoted by ChicoRacing and held at the always challenging (which makes it totally fun!!) trails at Mansfield.  The idea is to race as many laps of a 10km course as you can do in 8 hours.  A mix of steep hills, sand, and roots, this is a race I try to do every year...especially considering these trails are not normally open to the public.  The Epic 8 Hour MTB relay series (Spring, Summer, and Fall races), have become a southern Ontario must do.

The other option this year is the BORCA Spring Chicken.  The folks at BORCA (Beachburg Off Road Cycling Association) work their tails off to create and maintain a series of single track trails in Whitewater township (Ontario), and each year they hold the Spring Chicken to help support the trailbuilding/maintenance efforts.  The race is 60kms, with so much awesome single track (there is also a 27km version if shorter is more your style), in the heart of the Ottawa valley.  Climbs, shield rock, roots all mixed into the flow.  And for a great cause.  Check it out at  BORCA Spring Chicken! 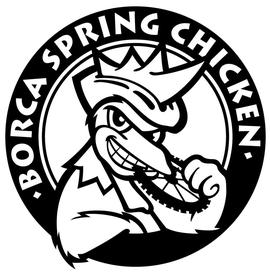 I really like the longer rides/races.  The sad truth for me is if the ride/race is less than 2 hours its hardly worth putting on the gear.  I don't know if its my metabolism, age, hairdo...or what, but it seriously does take me an hour or more to properly warm up.  Hence, my focus on 4+ hour races.  If you follow my strava most of my rides fit this narrative...(is that a proper use of the term???  sounds fancy anyways...).  And I try to drag along as many friends that like to do these types of rides...and most of them end up kicking my ass.  I've never claimed to be fast...I just really like to ride. 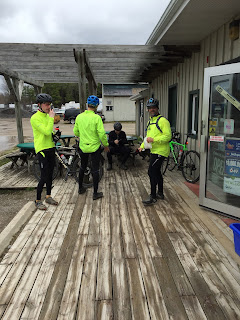 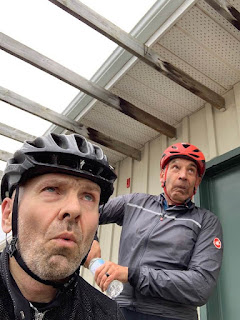 So Oggie can practice his Riot face... 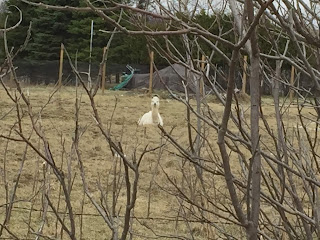 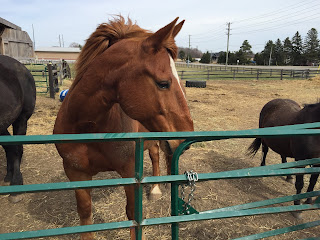 No horsing around on these rides...moo!

Anyways...always getting off track.  So... May 11th will be my next race...maybe I will manage a blog post before that. 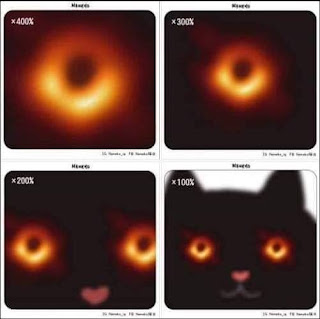 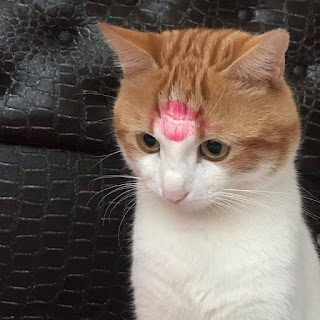 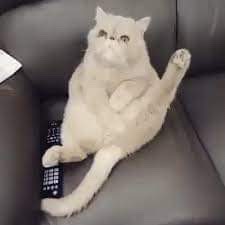