So the Fall Epic 8 Hr MTB relay race was held this last Saturday Sept 29th.  This was the 3rd and final race of the Epic 8 Hr series, and as I mentioned in my last post the team DaNoofie N DaNative (me and NewfieSteve) sat in second overall for the series after the first two races ( the Spring 8 and the Summer 8).  However, the catch was that I could not race due to my injury (see the last few posts...yeah I'm gettin lazy...); which left NewfieSteve to do the race on his own on behalf of our two man team.  So many kudos have to go to a guy who is willing to solo an 8 hour race without any of the recognition and 'glory' that goes with the solo category.


I had my bike prepped and ready to go in case NewfieSteve needed a quick back-up. 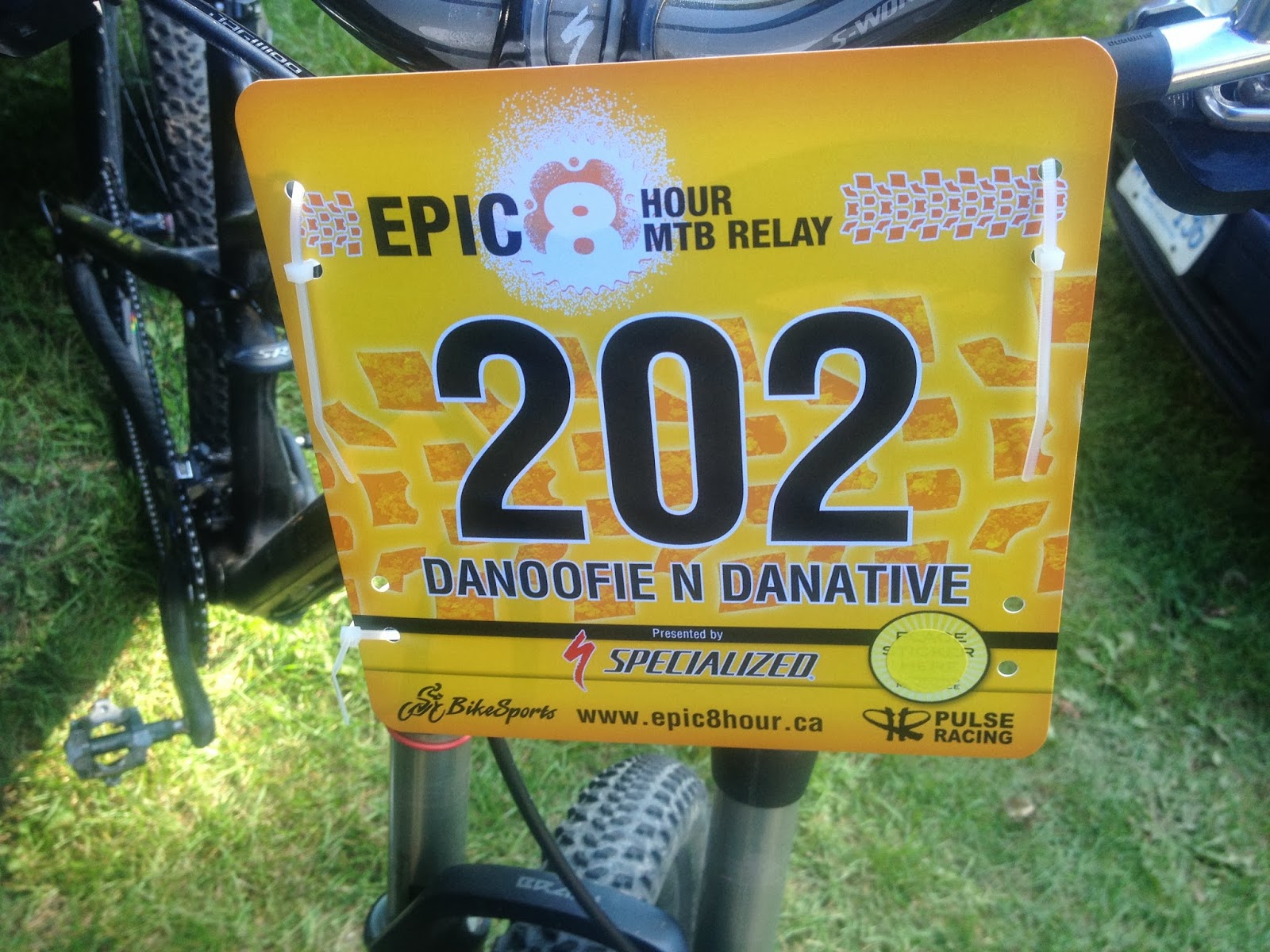 So I was the 'pit-bitch'...support person...purveyor (that's different than pervert) of nutrition, hydration, and mechanics.  Also in the pit was Fig, who was in the solo age 39 and under category and gunning to win; EnglishJim solo age 40+ with a goal to do 12 laps, and Giant solo age 40+ gunning for Fig.


So where to begin...how bout at the start...this pic is actually from the back of the start paddock... 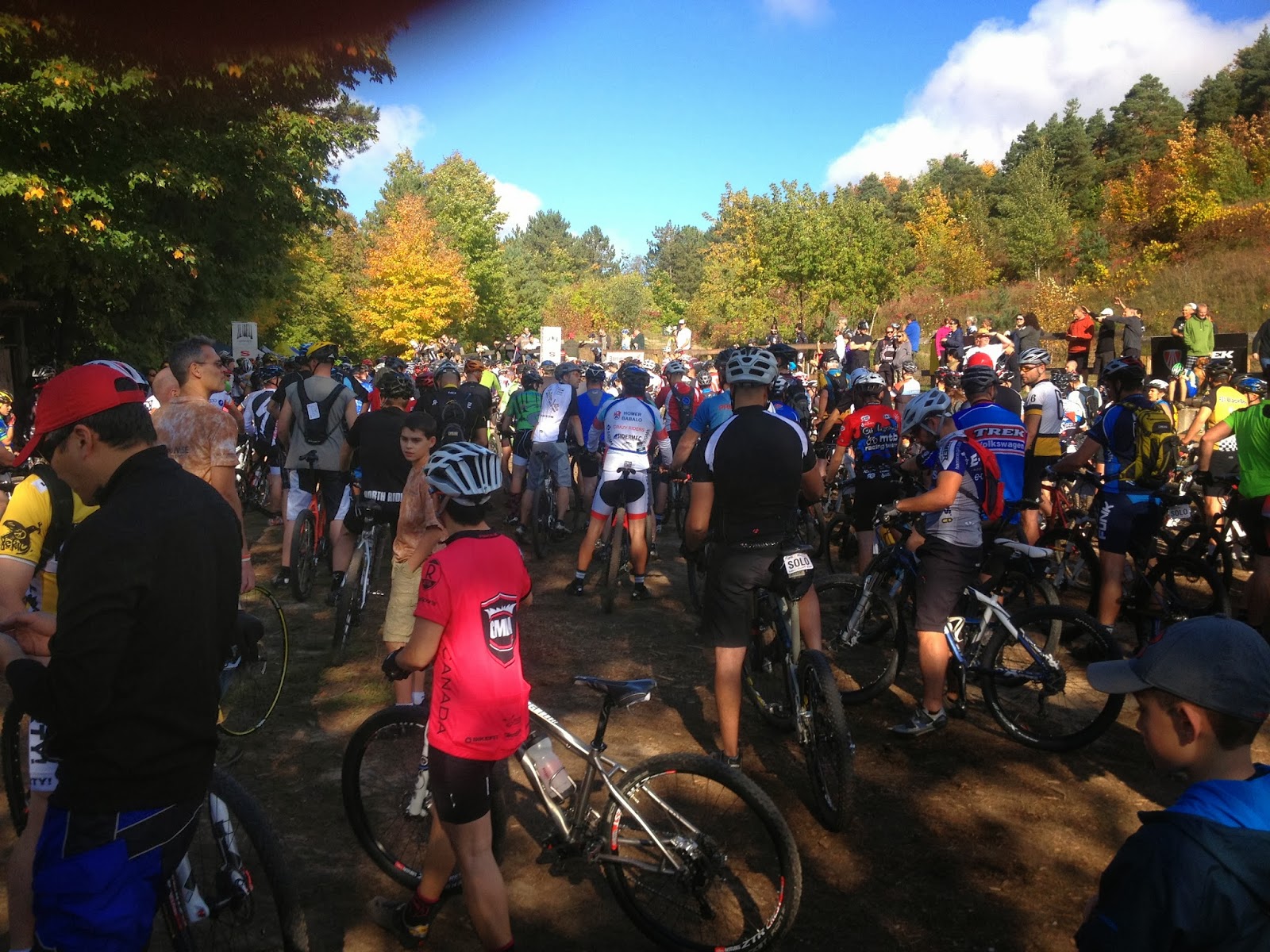 The race started at 10 am...and racers had to be finished their final lap by 6pm.  Off the start Fig was on fire and set the pace for the group...Fig is in peak form.  Apparently the race course was very fast, and flowy, with little climbing and very limited technical sections.  This would play well to those with lacking bike handling skills, and/or those more tuned to road riding. 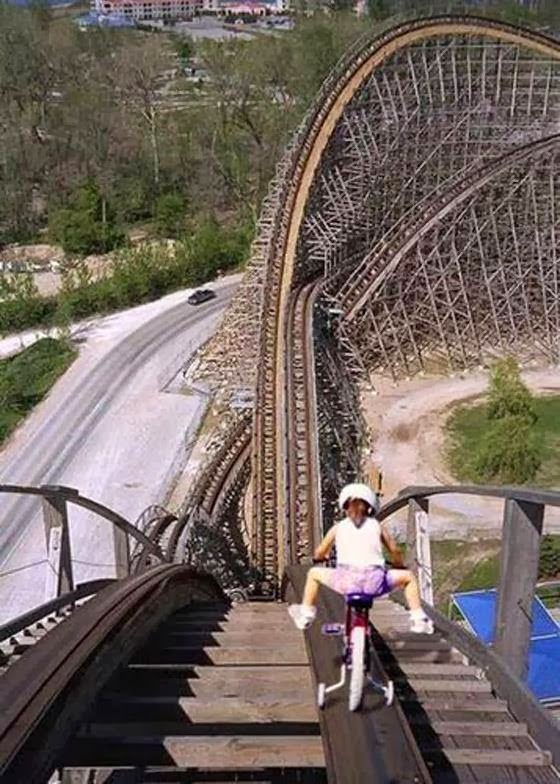 Giant tried to keep pace with Fig...and did until about his 6th lap when Fig dropped him like a fat potato at the hot prom (it's better to have loved and lost, than to save a stitch in time???; A bird in the hand is how you play the game??..ah I'm an idiot with idioms...). 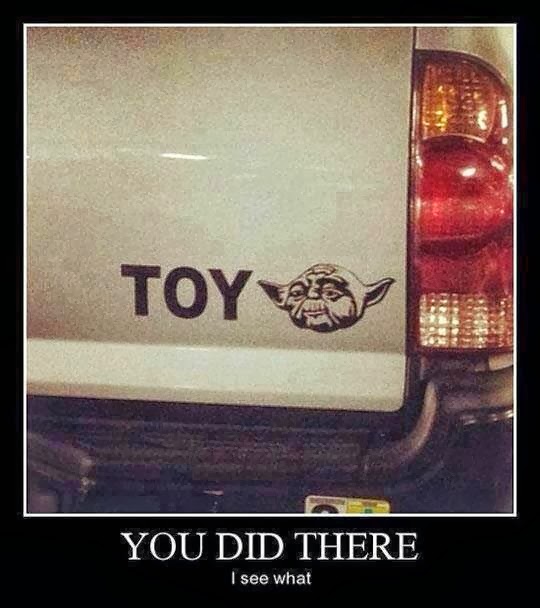 Actually, Giant had to stop to go number 2 (seriously).  Now not to get all technical on you here, but this is an indication of bad nutrition planning and may have cost Giant his battle with Fig.  Ah well, next time.


EnglishJim stopped a couple of times to have tea, crumpets (OK a sandwich or two) and a nap on the gravity chair (I am serious on this one)...so you know how this one is going to end...(do we need foreshadowing pics??).


NewfieSteve had DaNoofie N DaNative in 6th place early on, but after his 7th lap he came in to the pit to stretch and eat, and mentioned he was starting to hurt.  He was doing great for our team!


Towards the end of the day, Fig found himself battling on the last few laps with another racer (we will call him Tony....only cuz that's his name)...in fact they battled it out right up to the finish line after 13 laps, believing that they were battling for third place for this race.  Tony beat Fig to the finish line by seconds!!  Poor Fig!! 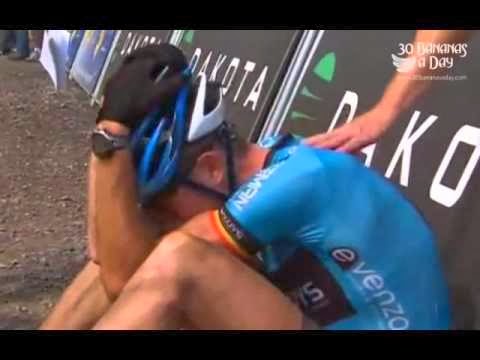 
Once Fig checked the race results, he realized Tony came in 2nd, and he came in 3rd for the day!!  Awesome job, podium for Fig!!  Not only that, he came in 2nd overall for the series.  Here is Fig on the podium. 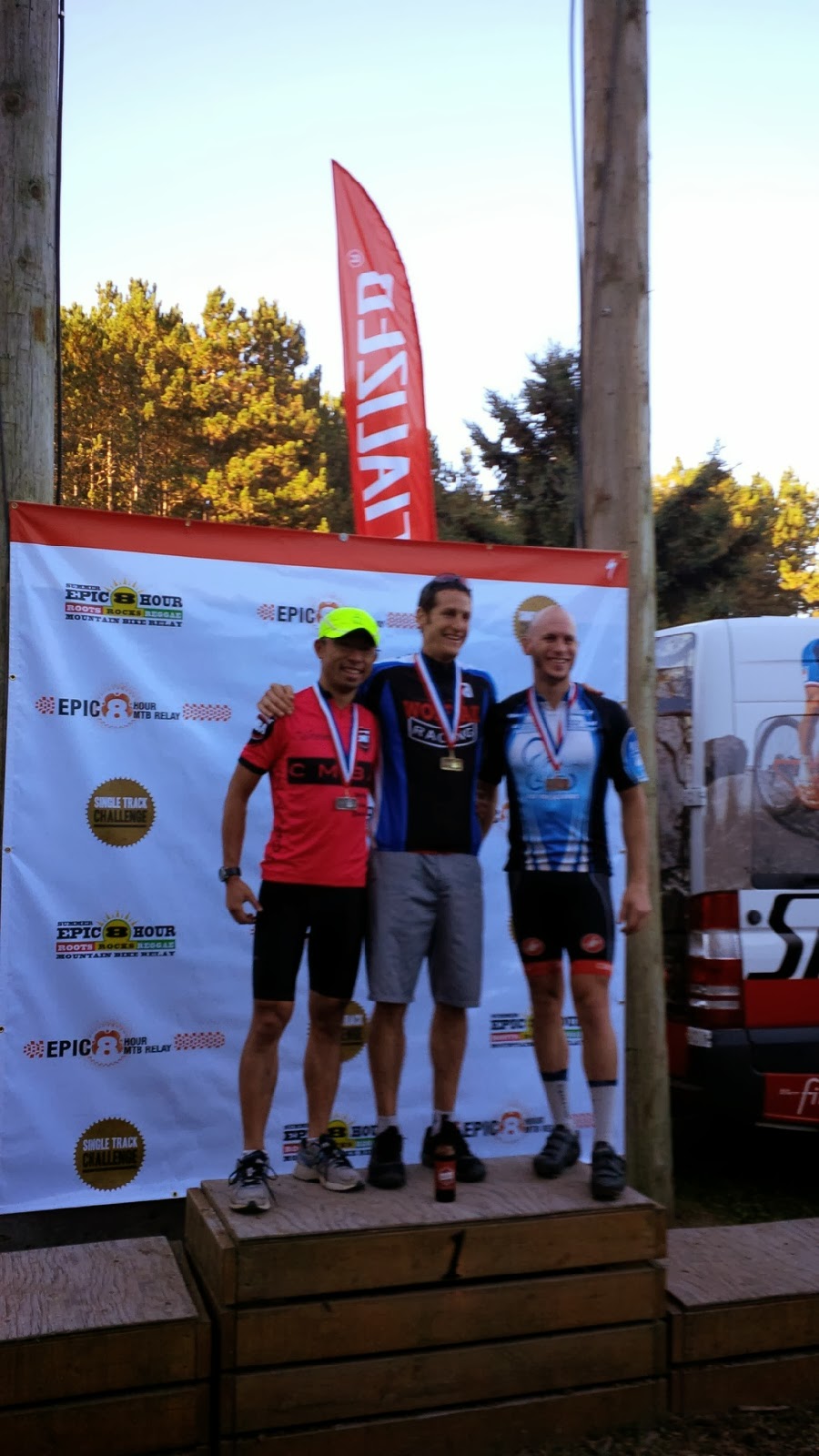 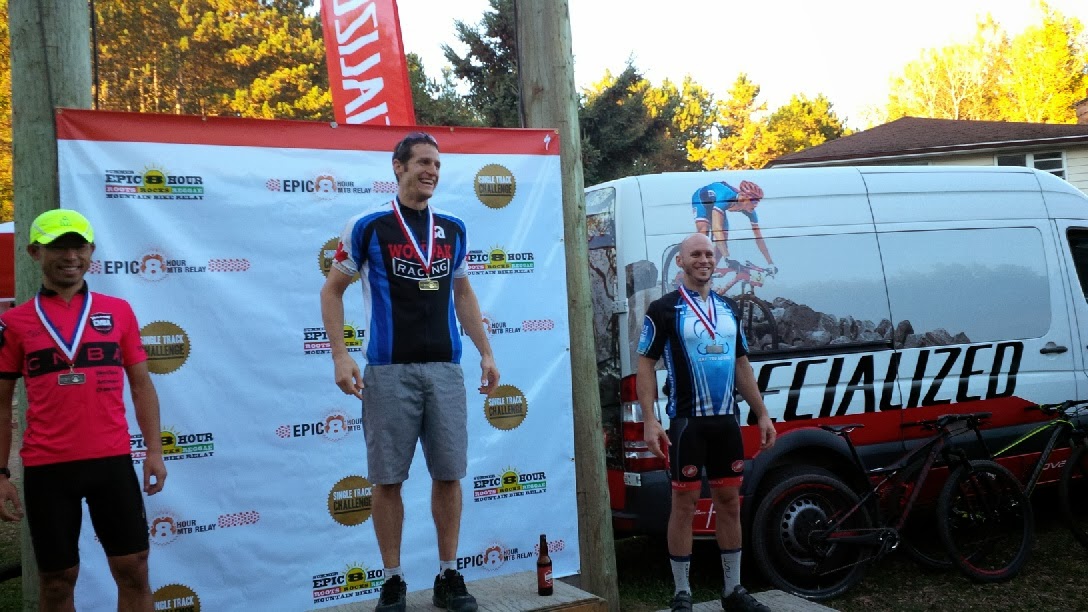 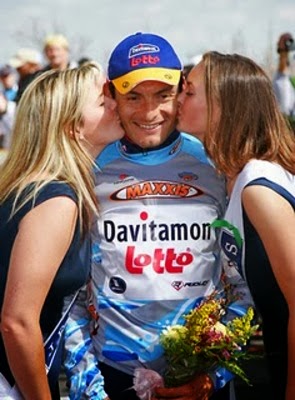 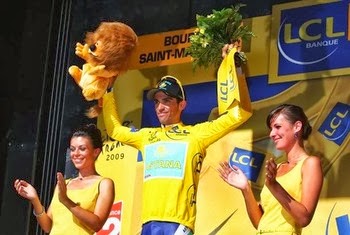 Hey!  I think Fig may have added a couple of fake pics there!!
To sum up the 'team' results, Giant got in 13 laps, finishing 15 minutes behind Fig...which is damn good!  EnglishJim's naps and crumpets cost him...he ripped off 9 laps, which is good enough, but short of what he was shooting for. 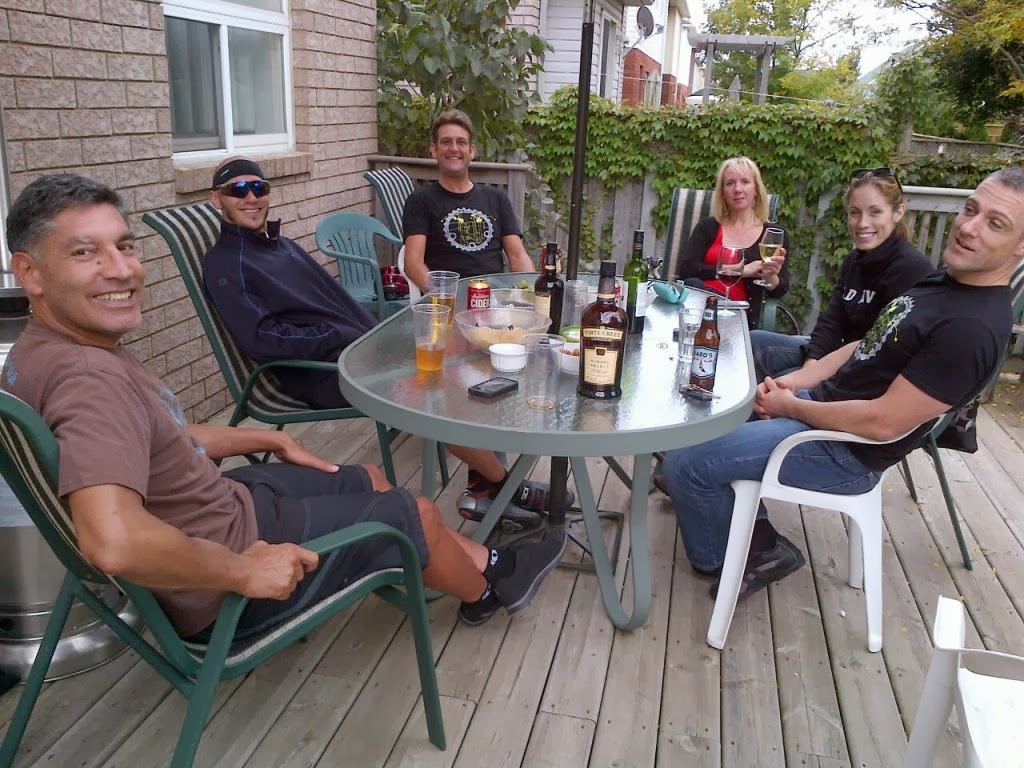 As far as the day went, it was perfect weather for a MTB race...making me only wish more that I could have been out there!  Soon!!


So...good lead in, to how my injury is progressing.  After a visit to the doc on Monday I was told that it was progressing well.  Apparently the torn muscle itself is healing well, the damaged soft tissue is beginning to heal, and now we can let the explosive wound hole seal up.  So according to the doc, I could start on light activity (trainer, and weights) this week...and judge how that would feel.


So after a couple of light weight workouts, a light trainer workout, and a light ride on the road with the mountain bike...it's all good.  So, I will be ramping it up a bit this week.


Now some of you have asked me to post pics of the wound, and now that it has healed up some, I am more comfortable doing so.  So here are the latest pics...if you think you will be grossed out, just close your eyes and scroll over them. 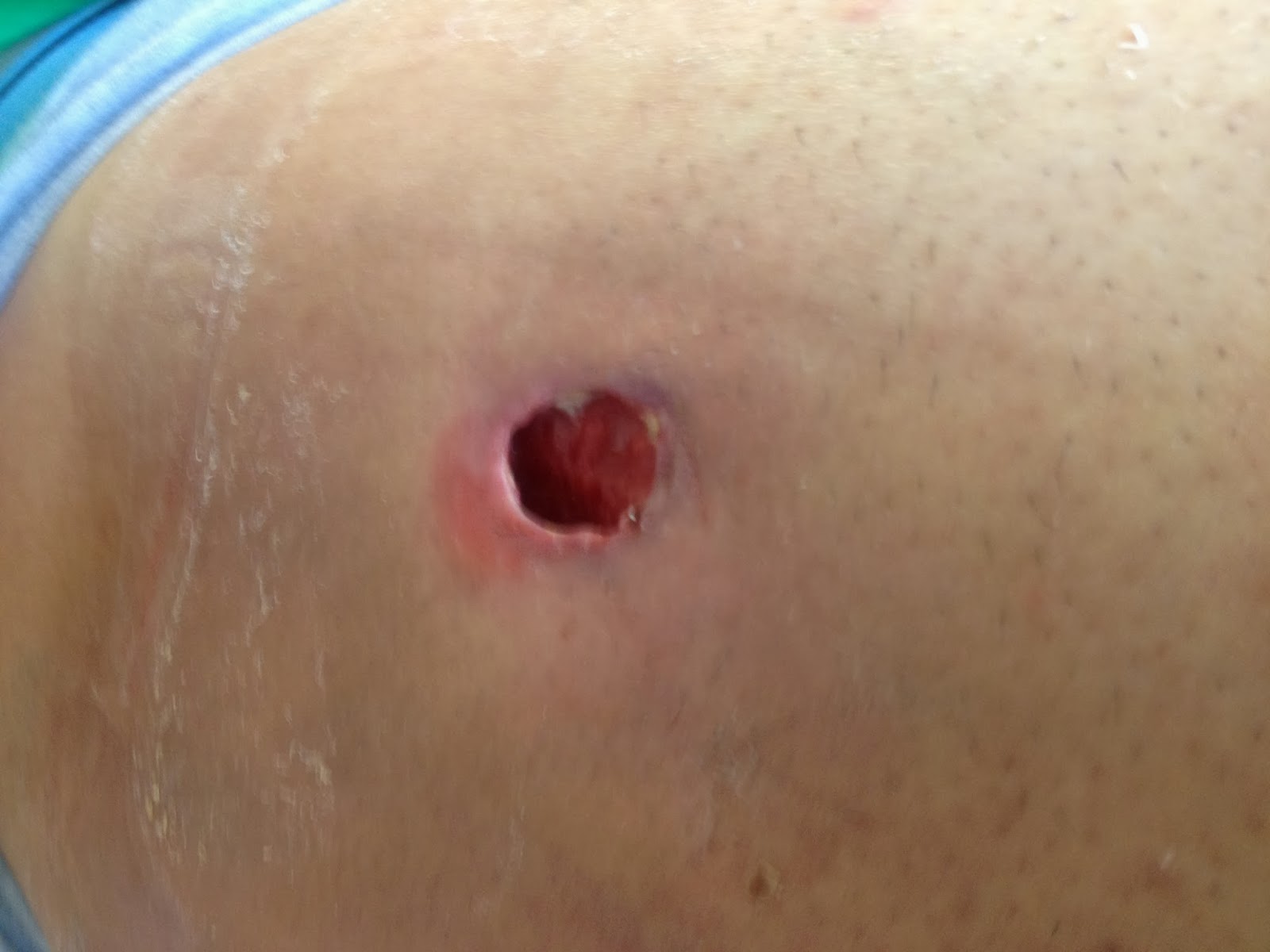 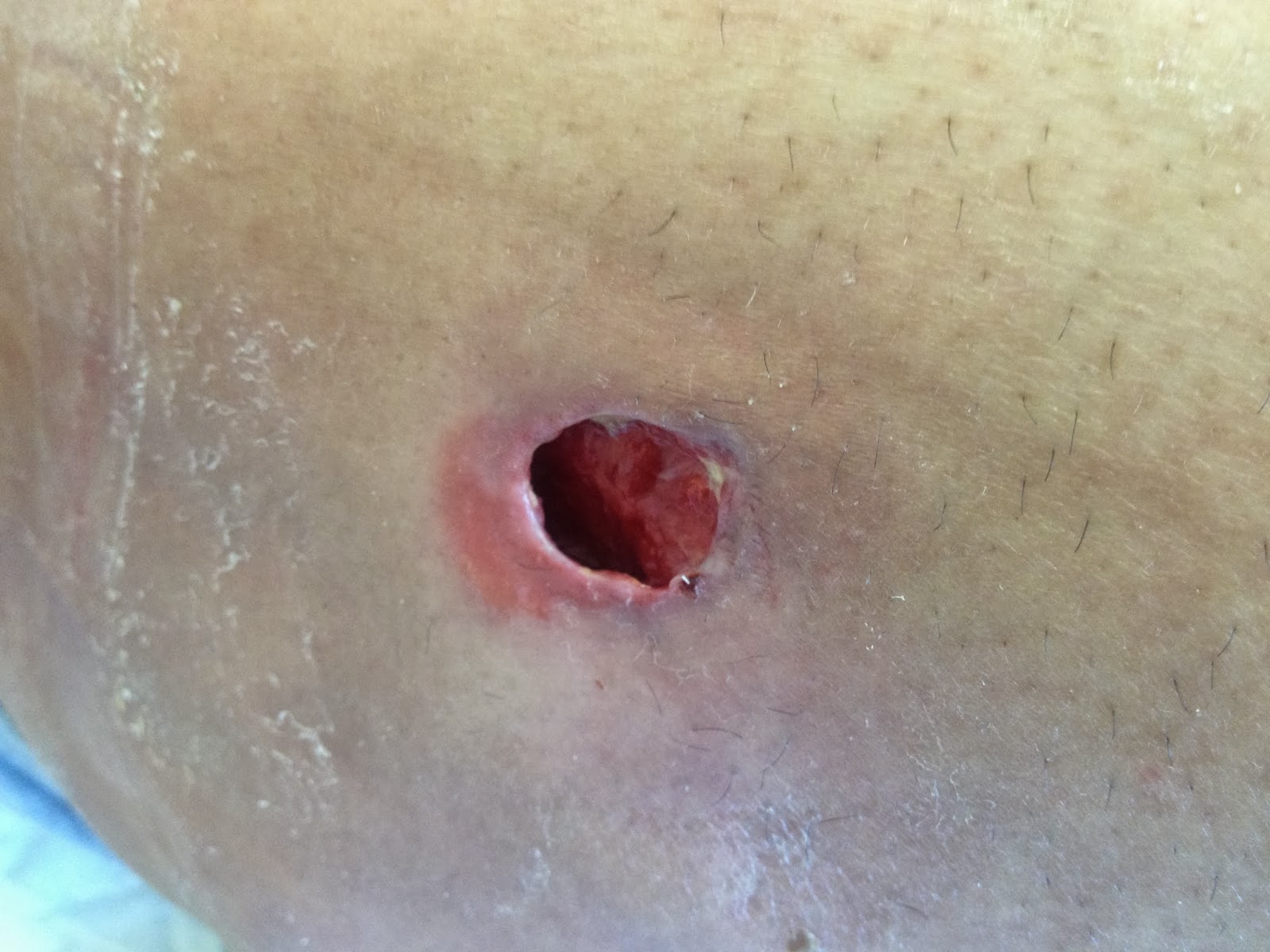 Now that wasn't so bad was it?  Better than this pic... 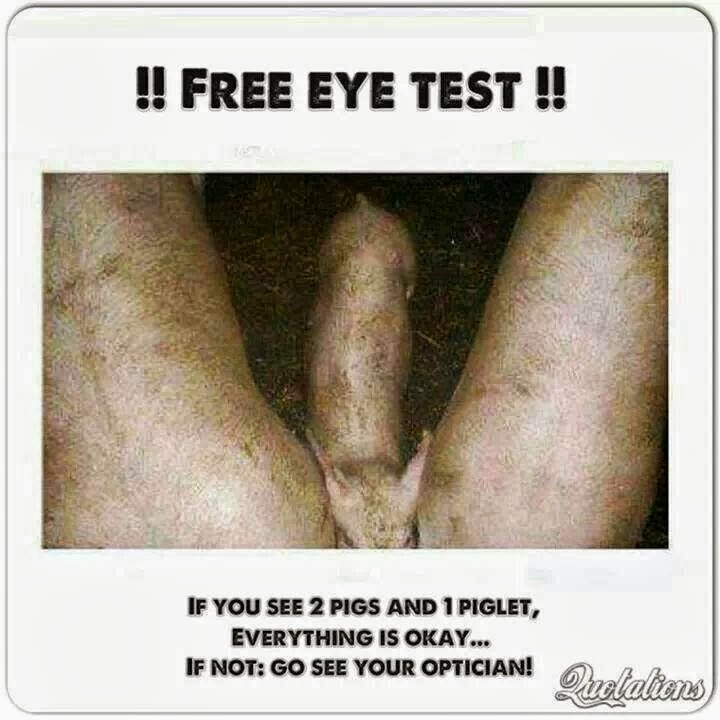 What??  Hey don't blame me for where is your dirty mind at!  It was just a pic of a pig family having dinner. 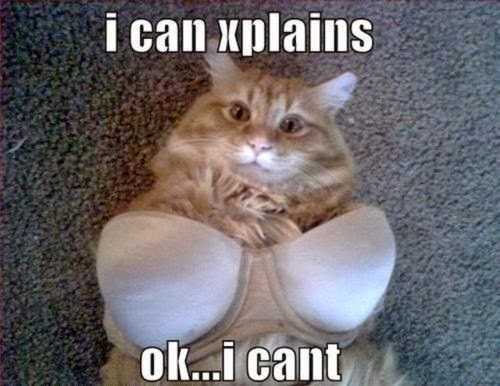 Anyways, as long as I can keep active, and progress the intensity, hopefully this thing can heal fast, and I can get back in shape.  Then where will we go from here??  There is always somewhere! 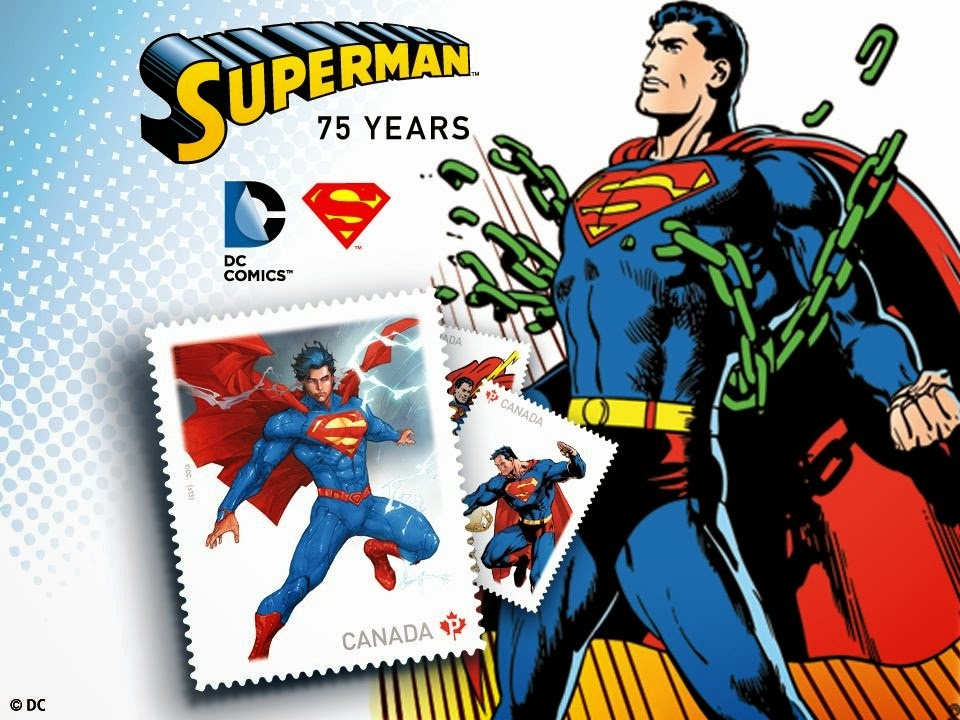